From the Landing in Italy to the Gothic Line 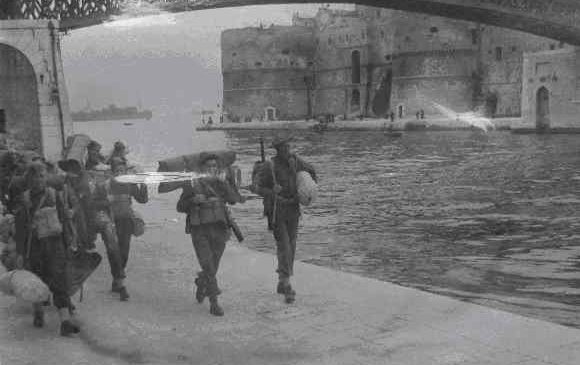 The Sixth South African Armoured Division was formed on February 1st, 1943, adopting the tactical symbol of a yellow triangle contained in a wider blue triangle.

All non professional personnel were volunteers. They agreed, after swearing a special oath, to be employed outside South Africa.

There were volunteers from Southern Rhodesia, as well as staff of the Cape Corps and the Indian and Malay Corps. These Corps consisted of non-European men. They were never used in combat because they were employed in support tasks such as driving, stretcher-bearing, and cooking.

In April 1943, the Division was sent to Egypt to begin training. This lasted about a year, during which reinforcements from South Africa arrived. The Division consisted of two brigades, the 11th Armoured Brigade and the 12th Motorized Brigade, in addition to the support units. Under the command of Major General Poole, they landed at Taranto on April 20th, 1944.

In order to reinforce the Division, it was joined, from May 20th, 1944, by the 24th British Guards Brigade composed, of support units, the 1st Battalion Scots Guards, the 3rd Battalion Coldstream Guards and the 5th Battalion Grenadier Guards. The Division came to the front early in May 1944, seconded to the British Eighth Army in the area of Cassino.
On May 28th, the advance northwards began, reaching Paliano on June 5th, Rome, on the 6th, and Viberbo on June 9th, after which they headed for Orvieto. In the battle of Celleno, which took place on June 10th, the German anti-tank artillery inflicted heavy losses on the South African armoured forces.

The Battle of Bagnoregio engaged the Division for two days, first against the German 356th Infantry Division and then the German 4th Paratroopers Division, ending on June 13th, this also with severe South African losses. They took Bagnoregio, and Orvieto was occupied without fighting.

The advance continued without pause, reaching Allerona on June 15th and Cetona, on June 19th. The next objective was Chiusi which was the first serious setback in the South African advance.

The battle lasted six days, from June 21st to 26th. They were without the crucial support of the armoured forces which had been halted by the heavy rains. The tenacious German defence of the town caused serious losses among the attackers. The Royal Natal Carbineers occupied the town on June 26th. The Brigade of Guards liberated Sarteano at the same time.

On July 4th, the vanguards of the Division reached the town of Castello di Brolio, Baroni Ricasoli’s residence (they were the producers of the famous Chianti Classico wine). The advance in the Chianti area permitted them to liberate Civitella in Val di Chiana and Castelnuovo Berardenga. The Eighth Army HQ assigned to the Division the task of continuing the advance towards Florence. Their targets were Radda in Chianti, which they liberated on July 18th, and Greve in Chianti which they freed on the 25th.

The Division later fought against the German 4th Paratroopers Division, occupying Mercatale Val di Pesa on July 27th and Impruneta on August 3rd.
On the night of August 4th, an Imperial Light Horse/Kimberley Regiment (ILH/KimR) patrol reached the Southern entrance of the Ponte Vecchio, the only bridge over the River Arno left intact in the city. The South African troops were the first to enter Florence, preceding the New Zealanders.

The Division received the order, after more than three months at the Front, to withdraw to Siena for a rest period of two weeks. On September 18th, an Indian infantry unit, the 4/13th Frontier Force Rifles, and a British artillery unit, the 166th (Newfoundland) Field Regiment, were attached to the Sixth Division. Two days later, they were placed under the command of the U.S. Fifth Army, seconded to the U.S. IV Corps.

The last days of August saw the return to the frontline of the Division in the area East of Empoli, on the Southern bank of the Arno River. The advance continued towards Pistoia, which the first South Africans entered on September 8th. The next step was to deal with the Apennines and the Green Line, better known as the Gothic Line.

The part of the front held by the Sixth Division on September 10th, from West to East, was Highway 66 going up to the hills of Pistoia, Pistoia town, and up to Highway 64 which leads to Bologna. On September 12th, tasked with protecting the left flank of the U.S. II Corps, the front line assigned to the South Africans, had expanded to include Highway 6620 (now Provincial Road 325) Prato-Castiglione.

The 11th Armoured Brigade was deployed on this part of the Front, together with the Indian troops of the 4/13th Frontier Force Rifles, who conquered Monte Acuto, on September 13th, and Poggio Alto on September 15th. Monte Pozzo del Bagno was occupied by ILH/KimR on September 18th.

On September 27th, the command of the U.S. IV Corps gave the order to focus the whole of the Sixth Division on the Highway 6620 to give maximum support to the U.S. II Corps.

Castiglione was their next target.

This website uses cookies to improve your experience while you navigate through the website. Out of these, the cookies that are categorized as necessary are stored on your browser as they are essential for the working of basic functionalities of the website. We also use third-party cookies that help us analyze and understand how you use this website. These cookies will be stored in your browser only with your consent. You also have the option to opt-out of these cookies. But opting out of some of these cookies may affect your browsing experience.
Necessary Always Enabled

Any cookies that may not be particularly necessary for the website to function and is used specifically to collect user personal data via analytics, ads, other embedded contents are termed as non-necessary cookies. It is mandatory to procure user consent prior to running these cookies on your website.