The Battle of Monte Catarelto 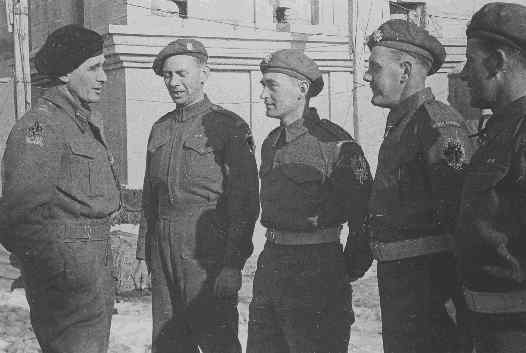 The 24th British Guards Brigade was ordered to occupy the heights of Monte Catarelto (point 707) East (the 1st Battalion Scots Guards) and Bucciagni Ridge West of Highway 6620 (the 3rd Battalion Coldstream Guards) which runs parallel to the Brasimone Creek.  Having arrived in Castiglione on September 28th, 1944, two companies of the Scots Guards went north.

One reached the Palazzo di Sparvo at 22h00. The next day, a sixteen year old lad named Lino, handed them a German map which had been left in his Grandmother’s house located above Creda. This map revealed the identity of the defenders, one of the best Divisions in Italy, namely the 16th SS Panzer Grenadier “Reichsführer”.

On the morning of September 30th, when the rest of the battalion had arrived in the area of operations and the tactical HQ had settled in at the Palazzo di Sparvo, the attack on point 678 began. It was located 1 km south of Monte Catarelto. After two hours of intense fighting, a company took over the top.

On the afternoon of September 30th, the attack on Monte Catarelto began. It was opposed by the II Battalion of the 35th SS Pz. Gr. Regiment. After three hours, the Scots were near the top but then they were forced to retreat into the nearby woods. During the night of October 1st, the Germans, reinforced by the 16th SS Armoured Reconnaissance Battalion commanded by Major Reder, organized the strongest counter-attack of the entire battle. They were opposed by divisional artillery, but in the late afternoon, the Scots Guards were forced to withdraw one km to the positions of point 678.

On October 1st, the attack of the 3rd Battalion Coldstream Guards at the Bucciagni Ridge on the opposite side of the valley of Brasimone Creek, was launched. It was defended by the 36th SS Pz. Gr. Regiment. On the night of October 2nd, the 5th Battalion Grenadier Guards took over the positions from the Scots, intending to occupy Monte Catarelto. The attack was opposed by SS troops, so they did not reach the top.

During the night of 2nd, 3rd October, the Germans retreated from the entire front held by the Brigade of Guards, allowing the Grenadiers to occupy Monte Catarelto and the Coldstream Guards to take Bucciagni Ridge.

The Scots Guards suffered 90 losses, including 23 killed, 58 wounded and 9 taken prisoner. The Grenadier Guards had 4 killed and 13 wounded. The Coldstream Guards had only one man killed. The 24th Brigade of Guards estimated that the German losses were 250 killed and wounded.

The impact that this battle had on the Scots Guards was so strong that a march in 6/8 rhythm played by bagpipes was devoted to Monte Catarelto. The Scots were awarded four decorations, three to the Grenadiers and two to the Coldstream Guards.