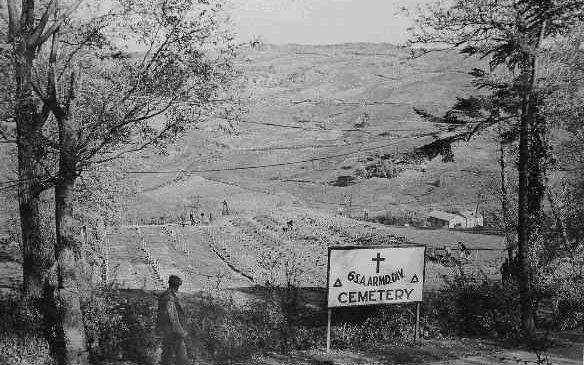 The War Cemetery with the highest number of South African fallen on Italian soil is located in Castiglione dei Pepoli. Of the 502 soldiers buried in this cemetery, 401 are South Africans, 99 are British and 2 are officers of the 4/13th Frontier Force Rifles Indian unit.

The British and the Indians were part of units seconded to the Sixth South African Armoured Division. Together with an American unit, the Sixth Division liberated the town on September 27th, 1944.

The advance towards Bologna continued in the following month of October, which proved to be the bloodiest in terms of casualties. After that, the advance stopped until the Spring of 1945.

The cemetery, located north of the town on a site overlooking the valley of the Brasimone Creek, became the burial place of the fallen of the Sixth Armoured Division since the early days of October. Each body was wrapped in a blanket, tied at the feet, waist and head, and buried with the help of civilians hired from Castiglione.

The South African 12th Graves Registration Unit, informed the Command of the Sixth Division, in a message dated March 2nd, 1945, that all known casualties suffered by the Division north of the Arno were now concentrated in Castiglione or, alternatively, in Florence. Enclosed in the message there was also the updated Nominal Roll of March 1st, regarding the 324 bodies buried in the Division Cemetery of Castiglione. Indian soldiers were not included in the list, except for two officers who are still buried in the cemetery, although they were part of the Division. The fallen Hindu and Sikh Indians, after an initial burial, were cremated as required by their religion and they are remembered in a Cremation Memorial in the Forli Indian War Cemetery.

The first memorial service was held in the Divisional Cemetery of Castiglione at 11a.m. on December 28th, 1944. The second was held on July 10th, 1945, when the South African Prime Minister Field Marshal Smuts, officially inaugurated the Cemetery Memorial built by South African engineers. The ceremony was attended by the Mayor of Castiglione, Mr. Giuseppe Girotti, who made a speech. He expressed his gratitude to the South African nation and promised, “The heroic remains of the Springboks will always be looked after by the grateful citizens of Castiglione”.

When the war ended, the cemetery was managed by the Imperial (now Commonwealth) War Graves Commission, an organization dedicated to the care of War Cemeteries containing the remains of soldiers of nations which belong, or had belonged (South Africa left it in 1961), to the Commonwealth.

After the war, many next-of-kin of the soldiers buried in the cemetery, approached the Municipality of Castiglione asking to have a flower placed on the grave of their loved one or to have a photograph taken of it. These requests were carried out as evidenced by the correspondence kept in the Municipal Archives.

Since then, the cemetery has been visited by veterans, next-of-kin and many other people from countries around the world. A delegation of the South African Legion, on behalf of the Zonderwater Block ex-POW Association, an association of former Italian prisoners-of-war in South Africa, brought an urn containing soil from the South African Defence Force Memorial at Fort Klapperkop, Pretoria. This urn is preserved in the Memorial of the South African Cemetery in Castiglione. The Zonderwater Cemetery, where 252 Italian soldiers are buried, is located in the place where the largest Italian prison camp in South Africa once stood. It contained more than 100,000 prisoners.

A tragic statistic: if we take into consideration the known age of only 359 soldiers on the day of their death, the average age of fallen buried in the War Cemetery of Castiglione was about 26 years old.

It is only fair to remember that at the Futa Pass, a few kilometres from Castiglione, the largest German War Cemetery in Italy is located, a resting place of over 30,000 soldiers.

“At the going down of the sun, and in the morning, we shall remember them.”