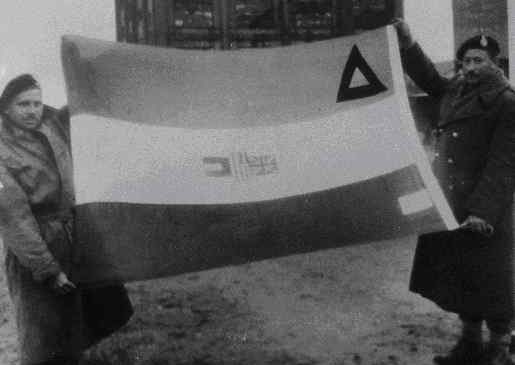 The Union of South Africa made use of the British Union Jack flag until early in 1928. The Flag Act came into force on May 31st, 1928 when both the new national flag and the Union Jack were hoisted together for the first time at simultaneous ceremonies

at the Houses of Parliament in Cape Town and at the Union Buildings in Pretoria. The Union Flag (British Union Jack) would continue to fly alongside the new South African national flag over official buildings. The dual flag arrangement continued until April 6th, 1957 when the Government brought it to an end.
Background to the Flag. Jan Van Riebeeck landed on the southern tip of Africa, we call Cape Town today, on the April 6th, 1652. He started to construct a provisioning station for the Dutch East India Company for the resupply of their ships with fresh produce while having to navigate past the southern tip of Africa in order to reach the Dutch East Indies.
The flag generally used by Dutch vessels at that time was in the colours of the House of Orange in honour of the Prince of Orange, the Stadtholder of the Netherlands. It is considered that the flag had its origins with the flag of the Province of Zealand which was red, white and blue horizontally. The red was then replaced by orange in honour of William the Silent, Prince of Orange and its first appearance occurred circa 1572.
The design was based on the so-called Jan Van Riebeeck flag or Prinsevlag (Prince’s Flag in Afrikaans) that was originally the Dutch flag, it consisted of orange, white, and blue horizontal bands or stripes. The South African addition to the design was three smaller flags centred in the white stripe. The smaller flags were the Union Flag (British Union Jack flag mirrored) towards the hoist, the flag of the Orange Free State hanging vertically in the middle and the Transvaal Republic’s Vierkleur (Four Colour) flag towards the fly.

South Africa withdrew from the British Commonwealth of Nations and became a Republic on May 31st, 1961. No changes were made to the national flag until 1994 when the current South African flag was introduced.