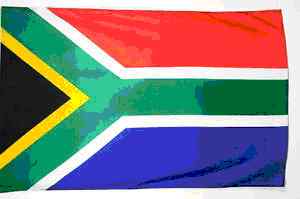 The first fully inclusive elections in South Africa took place on 27 April 1994. This event marked the end of Apartheid and the beginning of a democratic South Africa.
The existing national symbols (including the orange, white and blue flag which can be seen on the opposite wall) represented the oppressive white regimes of the past, and needed to be replaced.

FW De Klerk announced the release of Nelson Mandela and the intention to dismantle Apartheid on 2 February 1990, and this set in motion a process of negotiations that would eventually culminate in the new, democratic and free South Africa that was established in 1994.

The task of selecting the new flag was the responsibility of the Negotiating Council, and their aim was to have a new national flag in time for the elections as well as the inauguration of the new president. They launched a nation-wide competition for a new flag design in 1993, but despite receiving more than 7000 entries, did not find one that engendered whole-hearted support from either the Council or the public. They then contacted several design studios, but once again did not receive a winning entry.
It was up to the chief negotiators for the ANC and National Party respectively, Cyril Ramaphosa and Roelf Meyer, to find a solution to the flag issue. They finally decided to use as a temporary flag until the constituent assembly that was due to be elected in April 1994, could choose a flag for the new democratic South Africa. This interim flag was designed by a former state herald, Mr Fred Brownell, and proclaimed only one week before the elections, which meant that the manufacturers had to work around the clock to have the flags ready for the 27th of April.
The first official raising of the new flag was on 10 May 1994, the day Nelson Mandela was inaugurated as the first president of a democratic South Africa. The popularity of the flag led to it becoming the official flag of the Republic of South Africa.

It is the only 6-colour flag in the world, and the public has often found symbolism in each colour. However, according to the designer there is no symbolism attached to any of the colours. Rather, the design is supposed to suggest unity or the coming together of a nation.