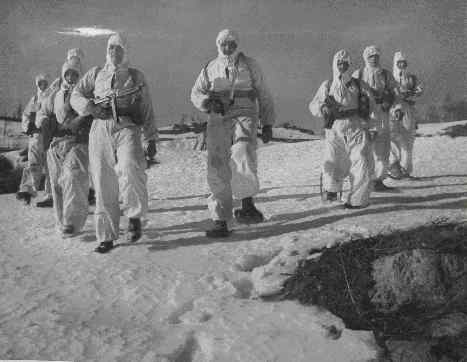 The conquest of Monte Salvaro and Monte Termine marked the limit of the South African advance up to April 1945. On October 30th, 1944, General Clark ordered that the advance was to resume no earlier than December 1st.

The losses, the winter weather conditions and the estimated reserves of ammunition available, contributed to this decision. The advance was, in fact, stopped for several months. The attack on Monte Sole, Monte Caprara and the heights dominating Highways 64 and 6620 that led to Bologna, was initially postponed and subsequently cancelled, at least until the Spring. The war activity was reduced to minor skirmishes and patrols.

The South African Department of Defence, fearing the possibility that the Division could lose 24th Guards Brigade, authorized the formation of the 13th Motorized Brigade. At 6am on January 13th, 1945, it was placed under the command of the Sixth Armoured Division, intended to reach the front line by the end of February.

Two days later, at noon on January 15th, the Division was placed under the command of the U.S. II Corps.

On the afternoon of February 1st, 1945, a ceremony was held in the main square of Castiglione to celebrate the second anniversary of the establishment of the Sixth Division. General Clark was present, but no civilians were permitted to attend.

On the night of February 18th, the take-over was completed and the 24th Guards’ Brigade left the Sixth Division after nine months, returning under the command of the British Eighth Army. As a token of their gratitude for the support they had been given, the armoured unit Pretoria Regiment (Princess Alice ‘s Own), was permitted by the Commander in Chief of the Brigade Guards, the privilege, a rare honour, to add to its flash the blue and scarlet colours of the Guards.

On February 23rd, the last unit of the Sixth South African Division on the front line was taken over by American units. For the first time since the beginning of the attack on the Gothic Line, the Division was transferred to the area of Lucca for a rest, reorganization and training period, which lasted about five weeks.

The night of March 31st marked the beginning of the return of the Sixth Division to the front, situated between the Reno and Setta rivers. On April 5th the hand-over to the 1st U.S. Armoured Division was finalised.

The 12th Motorized Brigade units were ordered to advance and conquer the complex Caprara–Sole-Abelle within a few days. This was the last main mountainous bastion on the way to Bologna.