The battles of Monte Sole and Monte Caprara 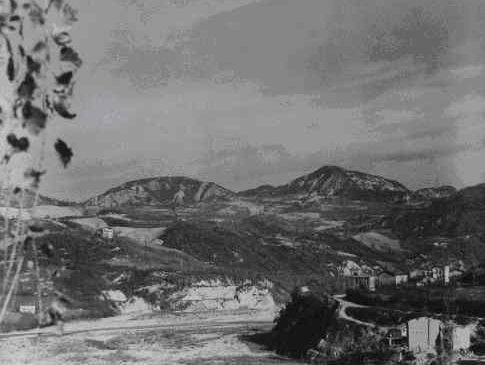 The task of commencing the attack of the U.S. II Corps on April 13th, 1945 was assigned to the Sixth South African Armoured Division. The main objectives were Monte Caprara, Monte Sole and Monte Abelle.

The units chosen for the assault were: the Witwatersrand Rifles/De la Rey Regiment (WR/DLR) for Monte Caprara and the First City/Cape Town Highlanders (FC/CTH) for Monte Sole and Monte Abelle. The heights were defended mainly by the 8th German Mountain Division.
In order to maintain the element of surprise, rather than proceeding with intense artillery fire before the scheduled time of the attack, a twenty-day plan of increasing bombardment, doubling the intensity in the week before the assault, was planned.

After two postponements, the attack was set for 10.30 pm on April 15th. On the same day, from 4.30 pm to 7.45 pm, air support began. Dozens of fighter bombers struck the German positions on Monte Sole and Monte Caprara with bombs, including incendiary ones, rockets and machine guns: two planes strafed South African positions causing 5 deaths, 4 of which were Italian soldiers assigned to support tasks, and 8 wounded, 5 of which were Italians.

Four and a half hours before the attack, artillery fire began; more than two hundred guns fired thousands of rounds over the area.

The effectiveness of this awesome shower of fire was modest, the shelters built by the German occupiers effectively protected them.

At 10.30 pm, as planned, the South African attack began. WR/DLR was the first to move, already heavily hit by German artillery and mortars before entering the action: progress was very slow due to mines, barbed wire and stiff German resistance; only before dawn a bayonet assault charged up the summit of Monte Caprara, reaching it at 6.15 am and consolidating a stable position at 8.15 am on April 16th.

The FC/CTH began to advance towards Monte Sole at 11.00 pm on April 15th; it encountered many minefields and heavy retaliation by an intense German artillery and mortar fire. On April 16th, at 1.00 am, the first elements reached the top. At 4.30 am FC/CTH was firmly on Monte Sole and advancing towards Monte Abelle, the attack on which had been planned for 5.20 pm on April 16th. At 5.45 pm the summit had already been reached by two platoons.
The battles were very bloody; WR/DLR killed 24 and wounded 144 on Monte Caprara, the Germans numbered 20 killed, 3 wounded and 39 prisoners. The FC/CTH killed 28, including the commander of the regiment, Lieutenant Colonel Angus Duncan, and at least 70 wounded in the battles of Monte Sole and Monte Abelle; the exact German losses are unknown but it is expected that they exceeded three times the South Africans ones. For these battles, numerous decorations were awarded, the FC/CTH alone received fourteen.

The fall of the Caprara-Sole-Abelle complex, and the northern heights opened the road towards Bologna and to the Po Valley in what became a pursuit of the retreating Germans. The last battle fought by the South Africans was for control of the bridge over the Panaro River in Finale Emilia, on April 22nd. On 2nd May 1945, the Commander of the German troops in Italy, General Fridolin von Senger und Etterlin, signed the surrender.

This website uses cookies to improve your experience while you navigate through the website. Out of these, the cookies that are categorized as necessary are stored on your browser as they are essential for the working of basic functionalities of the website. We also use third-party cookies that help us analyze and understand how you use this website. These cookies will be stored in your browser only with your consent. You also have the option to opt-out of these cookies. But opting out of some of these cookies may affect your browsing experience.
Necessary Always Enabled

Any cookies that may not be particularly necessary for the website to function and is used specifically to collect user personal data via analytics, ads, other embedded contents are termed as non-necessary cookies. It is mandatory to procure user consent prior to running these cookies on your website.