The Liberation of Castiglione 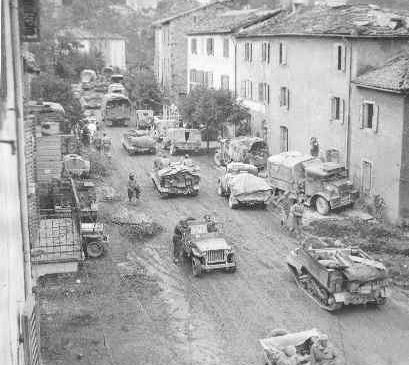 On September 25th, the 34th Division liberated Baragazza, Bruscoli and the area East of the River Setta.

Two weeks before its liberation, Baragazza had been the scene of a bloody Allied bombing raid.

On September 11th, 1944 at 9.12, 24 twin-engine B-26 medium bombers of the U.S. 17th Bomber Group, took off from Sardinia. Their target was the defensive position North of Santa Lucia (the province of Florence). One aircraft returned to base, five bombed the town of Baragazza, dropping 576 cluster bombs each weighing 20 pounds at 11.14. Eighteen planes returned to base, still fully loaded. They had been unable to locate their target because of the heavy cloud cover. Field Marshal Kesselring, Commander in Chief of the German troops in Italy, was in Baragazza visiting the 334th Infantry Division HQ that day. He was not injured by the bombing, but thirty-four civilians were killed in the raid.

Towards the end of September, the Sixth Division was ordered to advance along the Prato-Castiglione road (at that time Highway 6620) and the high ground to the East and West. The task was allocated to the 11th Armoured Brigade to which the Indians of 4/13th Frontier Force Rifle had been seconded.

The U.S. 91st Cavalry Reconnaissance Squadron was ordered by the commander of the U.S. 34th Division to control the road junctions between Highway 6620, North of Castiglione, and the roads to Baragazza and Sparvo. On September 25th and 26th, a company of the Imperial Light Horse/Kimberley Regiment (ILH/KimR), entered Rasora, Spiaggia, Bagucci and Le Crocicchie without encountering any opposition.

On September 26th, the U.S. 91st Squadron advanced along the highway. Two platoons headed East reaching Ca’ di Landino in the evening. The rest of the scouts went along the highway, finding it damaged in several places, and reaching the junction with the road to Le Crocicchie.

At lunchtime on September 27th, despite the rain and the massive damage they encountered, the ILH/KimR’s vanguards entered Castiglione. They were preceded by the U.S. 91st Squadron. The last Germans had already left on September 25th. They cleared Castiglione, and the 24th British Brigade of Guards protected the left flank of the U.S. II Corps, advancing along the slopes to the West and East of the Brasimone Creek.