The battles of Monte Stanco and Monte Salvaro 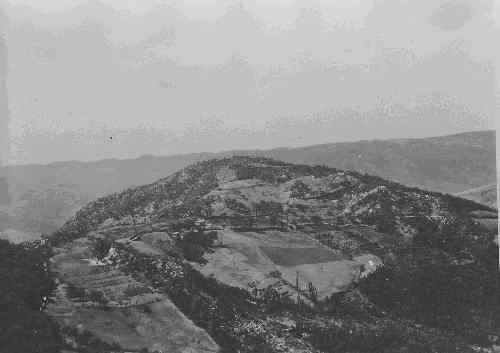 At noon on October 5th, the Sixth Division was placed under the direct command of the U.S. Fifth Army keeping the task of protecting the left flank of U.S. II Corps. After conquering Monte Vigese and the surrounding areas, the next objective was Monte Stanco (point 719), and then Monte Salvaro (point 826).

The attack of Monte Stanco was initiated at dawn October 8th by the 4/13th Frontier Force Rifles. After reaching the summit, an immediate counterattack was led by the 1st and 2nd Battalion of the 36th SS Regiment which forced the Indian troops to retreat.

On the night of October 10th there was an attempt to attack the mountain again, this time conducted by the Royal Natal Carbineers (RNC), the peak was reached a few hours later. Once again, a violent counterattack by two battalions of the 36th Regiment SS, although opposed by artillery, caused the withdrawal of the Natal Carbineers beyond the point of departure.

On October 13th, again at night, the third attack led by Witwatersrand Rifles/De la Rey Regiment (WR/DLR) and the First City/Cape Town Highlanders (FC/CTH), began. After heavy fighting against the 94th German Infantry Division, who had taken over the SS troops, the whole area of Monte Stanco was conquered in the afternoon of the same day, thanks to solid support by artillery and heavy mortars.

On October 14th, Grizzana was liberated and the advance continued toward Monte Pezza, Monte Salvaro and Monte Termine.
Monte Pezza was the first goal to be achieved, the Royal Natal Carbineers, then being replaced by the WR/DLR, and the FC/CTH fought against the 35th SS Regiment together with the 274th Grenadier Regiment of the German 94th Infantry Division, before finally conquering the Monte and the surrounding area during the night between October 17th and 18th.

The advance of the WR/DLR towards Monte Salvaro (point 826) began on the night of 19th October, at the same time the Scots’ Guards, as a diversion, began the advance towards Monte Alcino. The area was defended by the German 94th Infantry Division.
The complex of Monte Salvaro consists of two peaks: the southern one is point 806, the northern one is point 826, in the middle of a strip of relatively flat terrain.

The first goal, point 806, was reached in a couple of hours, the position was immediately targeted by German artillery and mortar. A series of counterattacks followed on October 20th, accompanied, once again, by violent bombardments of German artillery.
On October 21st, the exhausted WR/DLR was taken over by the Imperial Light Horse/Kimberley Regiment (ILH/KimR).
The final attack was on October 23rd, harshly opposed by the Germans with constant bombings and attempts to counterattack. On October 24th, the top of Monte Salvaro was finally in South African hands. On October 24th Monte Termine was also occupied by the Scots Guards without opposition thanks to the withdrawal of German troops from these positions.

Afterwards, General Poole declared the battles of Monte Stanco and Salvaro as the toughest fought by South Africans during World War Two. The final balance of the losses of the South African regiments which took part in the fighting during the month of October, was very high, and in addition to no less than 350 wounded and missing, there are 39 fallen of the RNC,16 at Stanco and 14 at Salvaro, 45 of the WR/ DLR, 22 at Stanco and 16 at Salvaro, 18 of FC/CTH, 13 at Stanco, and 32 of ILH/KimR, 16 at Salvaro, a total of 134 soldiers, buried in the Castiglione war cemetery
With regard to the German losses, there are no precise figures, but it can be estimated that, including prisoners, they are at least three times higher than the South Africans ones.